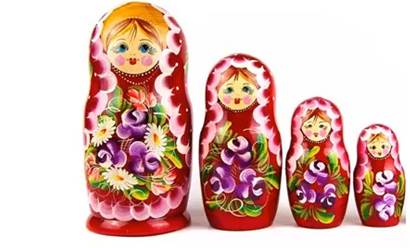 When they hear the term “nested IFs”, a lot of people will visualize a structure whereby you have one parent IF statement with several IF statements nested inside it; and this is not actually the case. 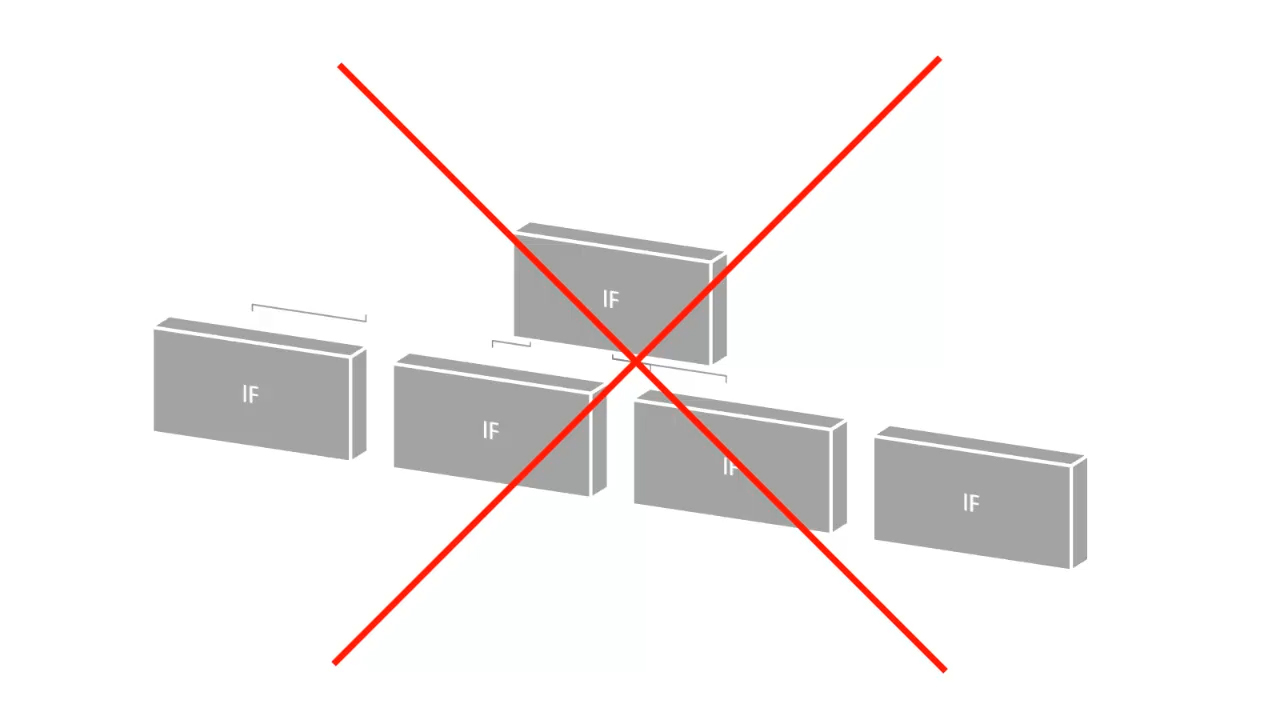 A better way of visualising nested IFs is to think of a Russian doll arrangement, whereby each IF statement is nested inside the previous one.

Overview of our Nested IF Example 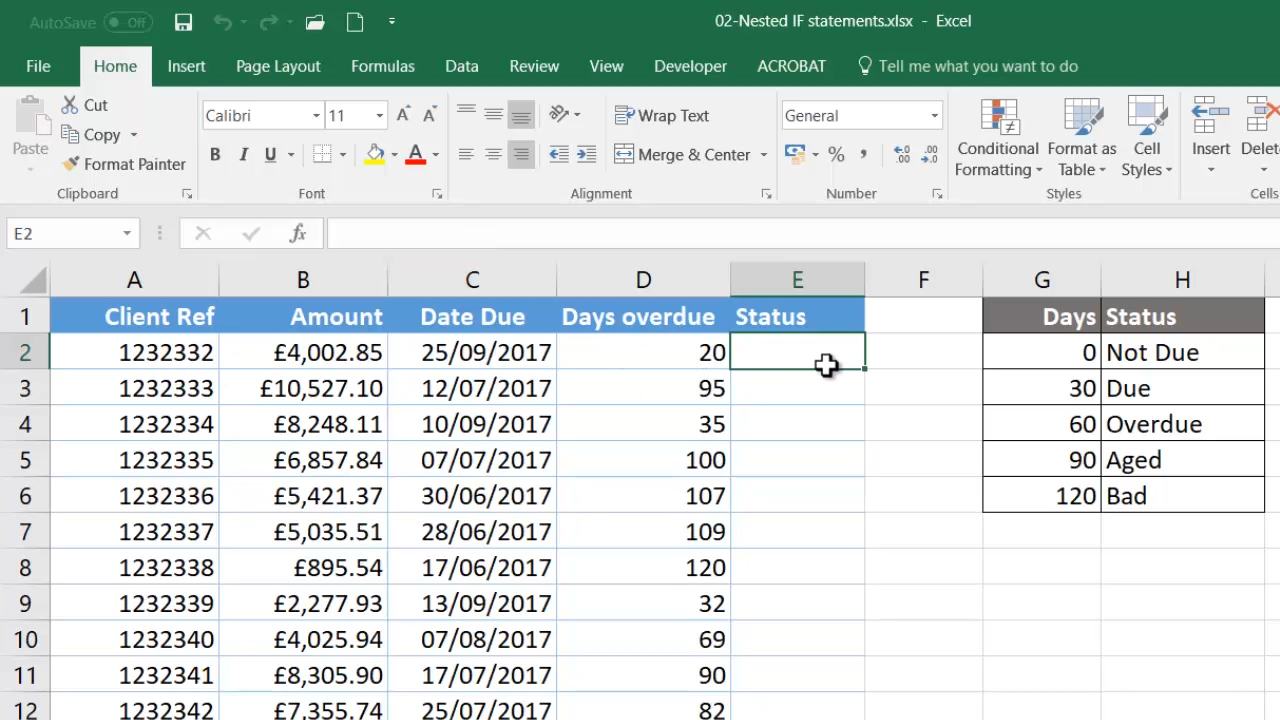 However, before we start discussing the formula, I should just explain one quirk that you will notice in this spreadsheet. The Days Overdue column contains static values and the Date Due column contains a calculation to display the date.

Obviously, in a real scenario, the reverse would be TRUE; we would have static values in the Date Due column and use a formula to calculate Days Overdue. This has been done for tutorial purposes; so that we can both have exactly the same data in column D. 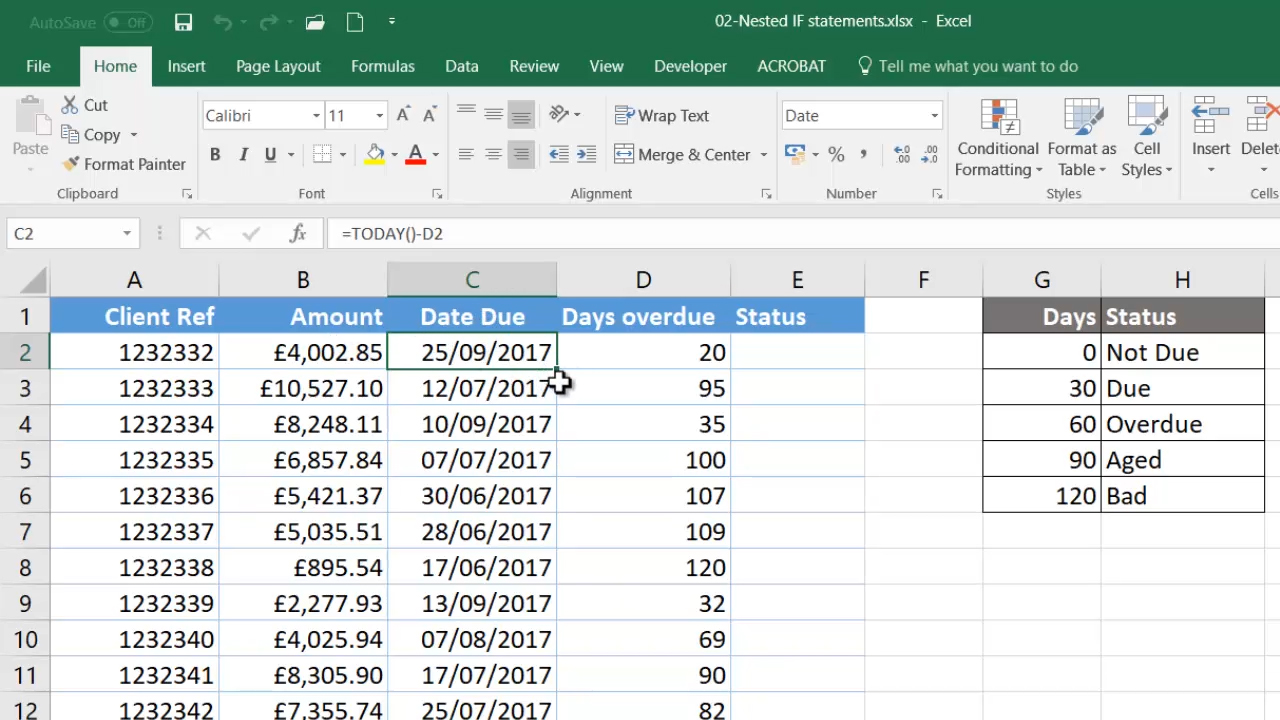 To calculate the Status, we will use the criteria shown in columns G and H; thus, for example, 120 days overdue, or greater, indicates that the account status should be listed as “Bad”.

When you are using nested IF statements to test numerical values, it is always best to start with the highest value and work your way down to the lowest value. This means that you do not need compound testing; you do not need to say between 90 and 120, between 60 and 90, et cetera.

The reason for this is the way in which Excel evaluates the IF statements: it will stop evaluation as soon as it finds a TRUE value. Thus, by eliminating the highest value in our first test, when we perform our second test, we know that the value must be less than 120; because if it were not, the second test would never even take place. Hence, in each of our tests, we will simply use greater than or equal to; we will never need to use the less than operator.

Before we go ahead and write the formula, let us have a brief discussion of how nested IFs work.

Staying with our days overdue example, let us say that we have a cell which contains 20 days overdue; and let us run this value through our nested IF structure. We start with our outer IF; the one that contains all the others. It has its usual three arguments: logical test, value-if-true and value-if-false. 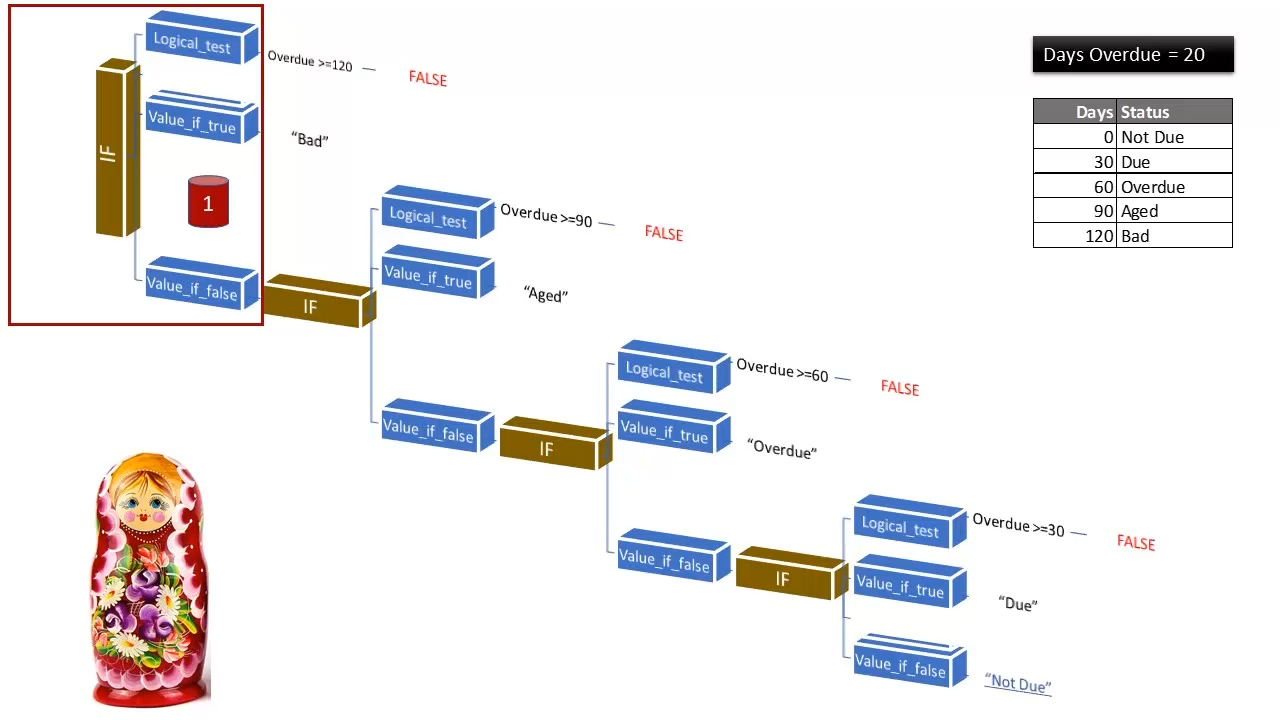 The logical test for the outer IF (days overdue greater than or equal to 120) proves to FALSE; but, instead of having a literal value as the result of this argument, we need to do some further testing. Thus, the value-if-false argument must be supplied by another IF statement; and this is how we end up with a second IF statement nested inside the first. 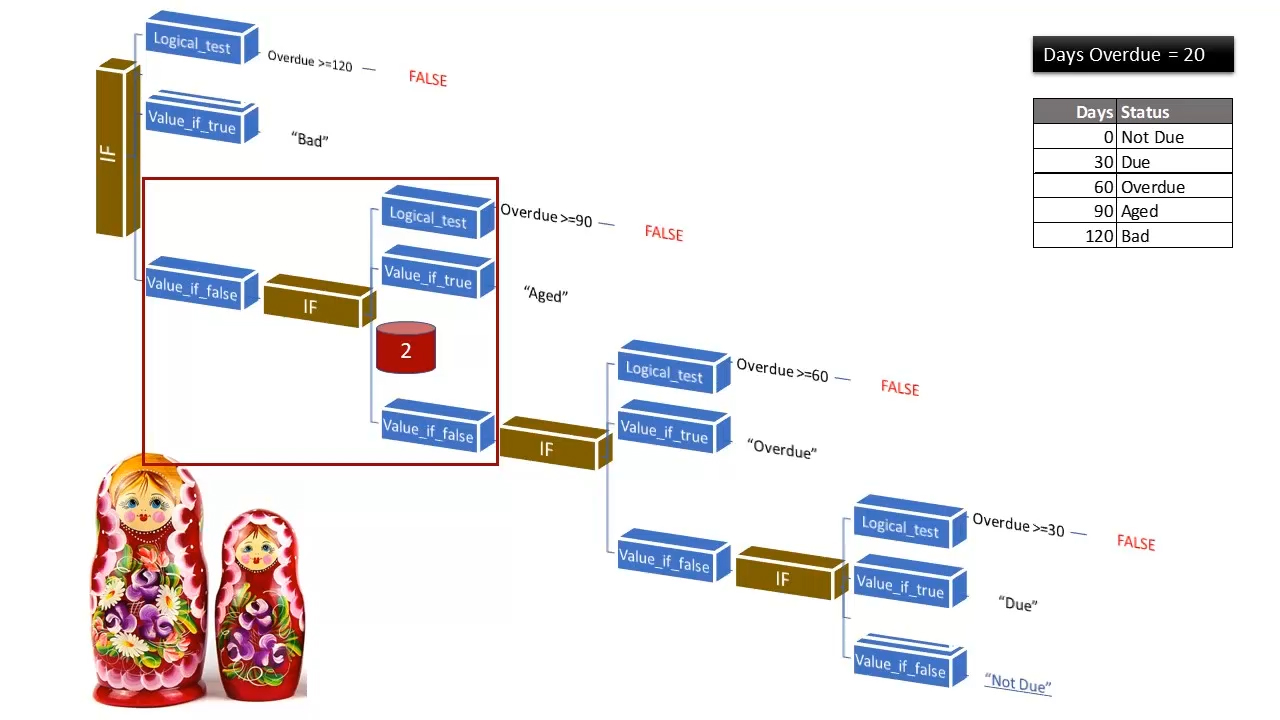 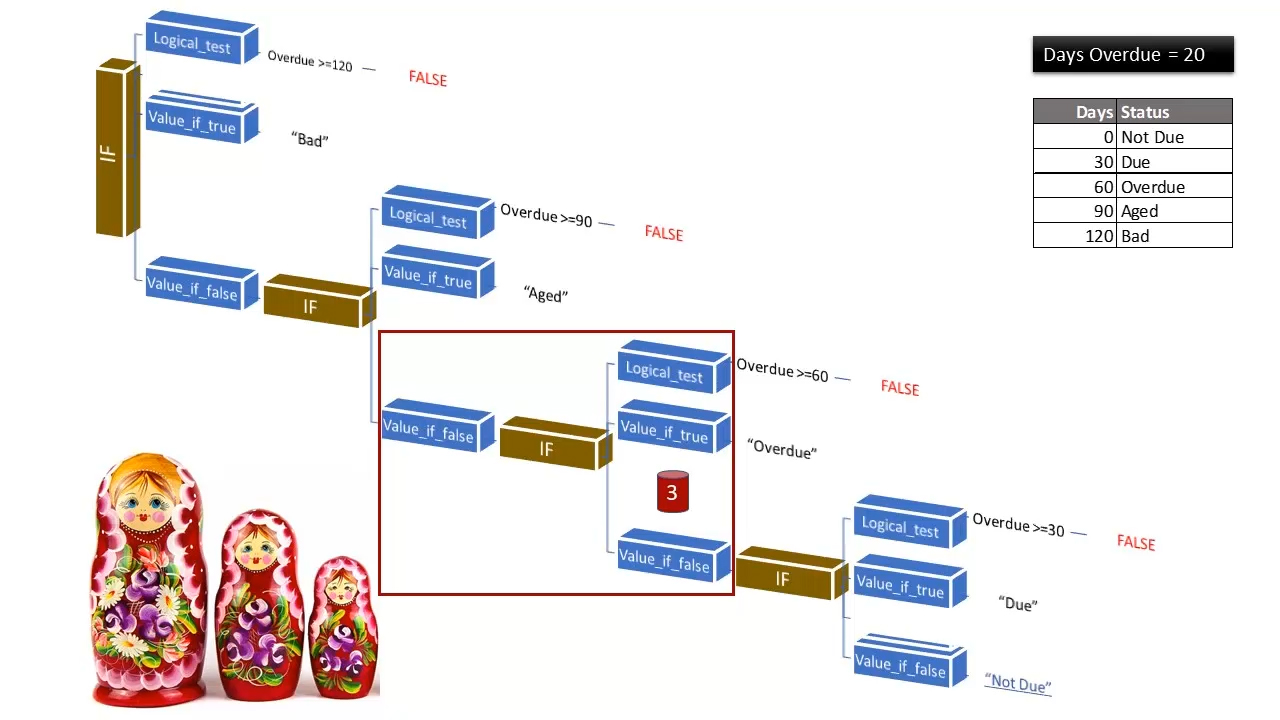 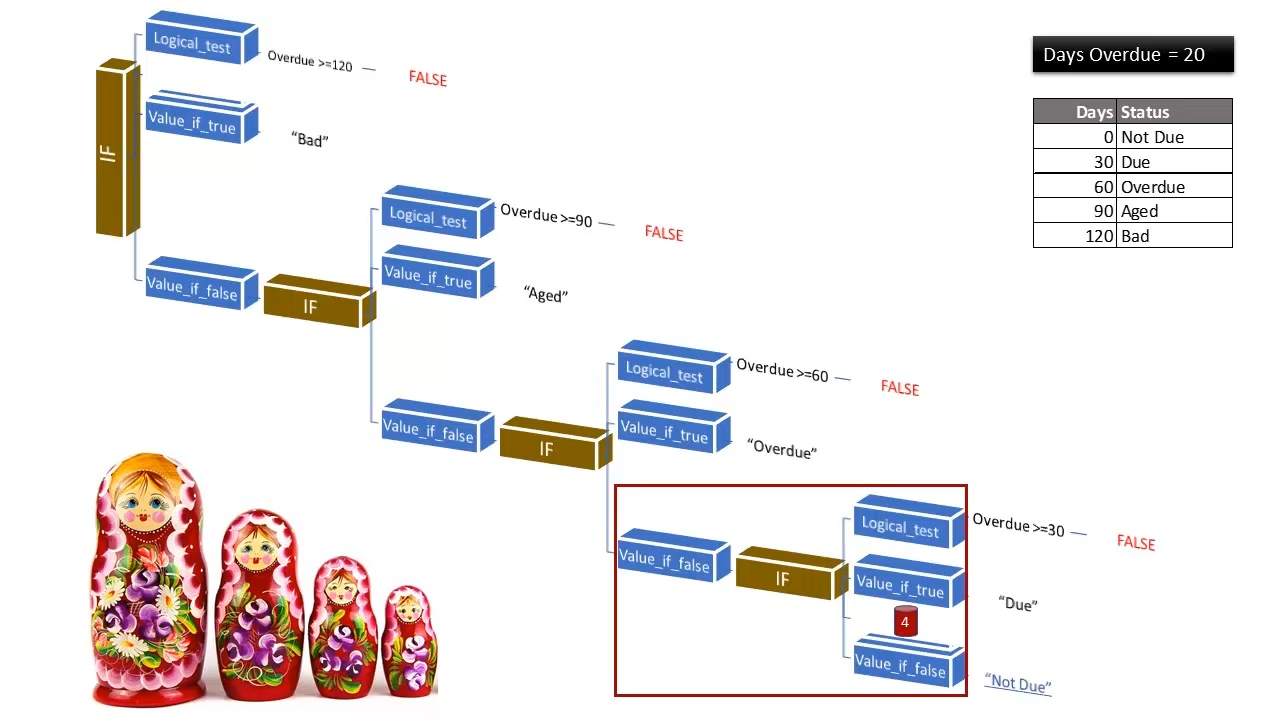 The logical test argument of the fourth IF statement is the final test within the formula; and, once again, the test proves to be FALSE. However, now, since we have done all our testing, we can finally return the literal value: “Not due”.

So, back to our workbook “Nested IF statements.xslx”, which you should have open on your screen (if you are following along with this tutorial). Let us increase the size of the Formula Bar, by clicking on the Expand/Collapse button, as shown below; so that we can split the formula onto multiple lines.

Click in the first data cell of the Status column: E2; and let us start with the first two arguments of the outer IF statement (logical test and value-if-true): =IF(D2>=120, "Bad", . 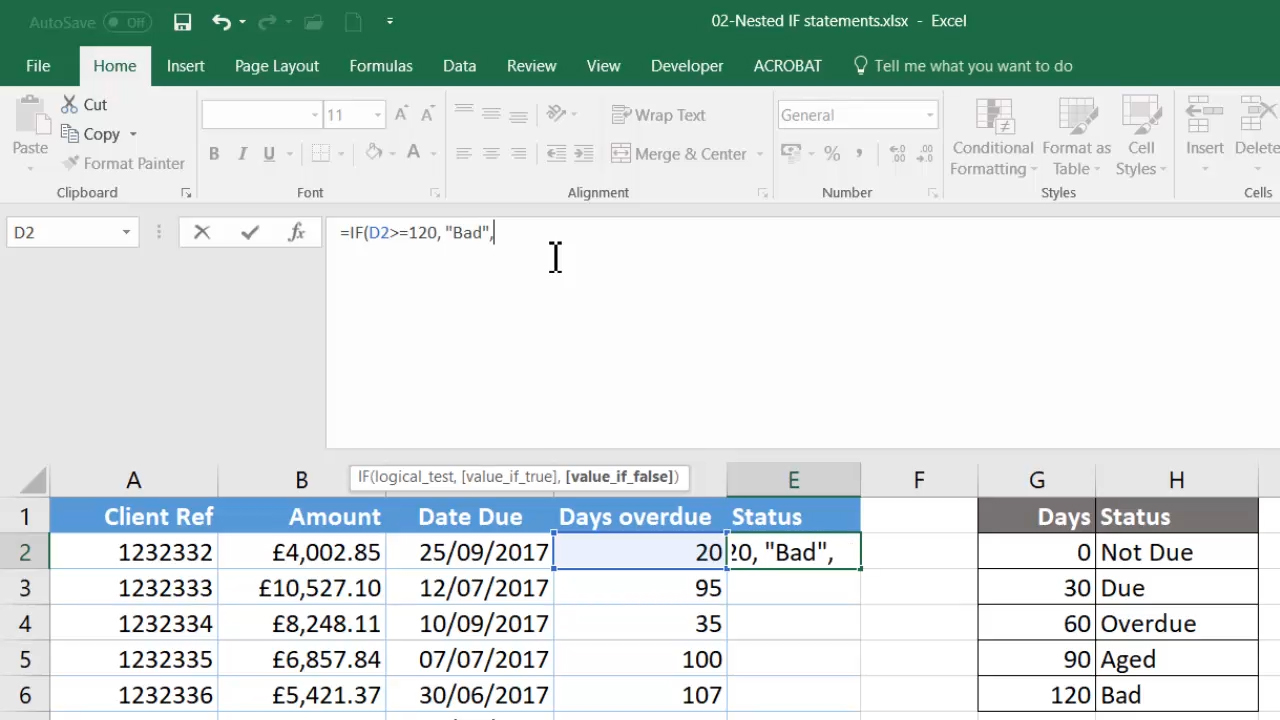 Since we need three further very similar tests, we can now highlight and copy the formula (minus the equal sign of course). Then, using Alt-Enter for a new line and the spacebar for indentation, we can paste the text that we have copied three times, each time indenting a little further to indicate the fact that each IF statement is supplying the third argument of its parent IF. (See below.) 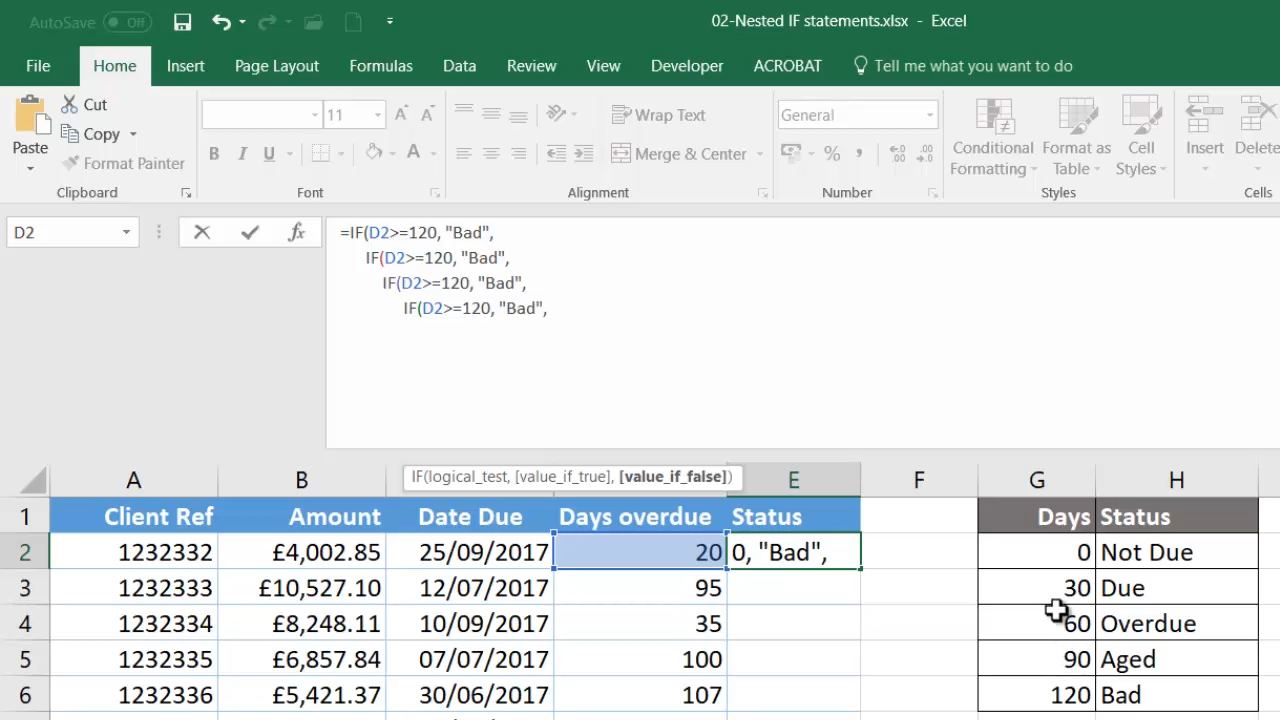 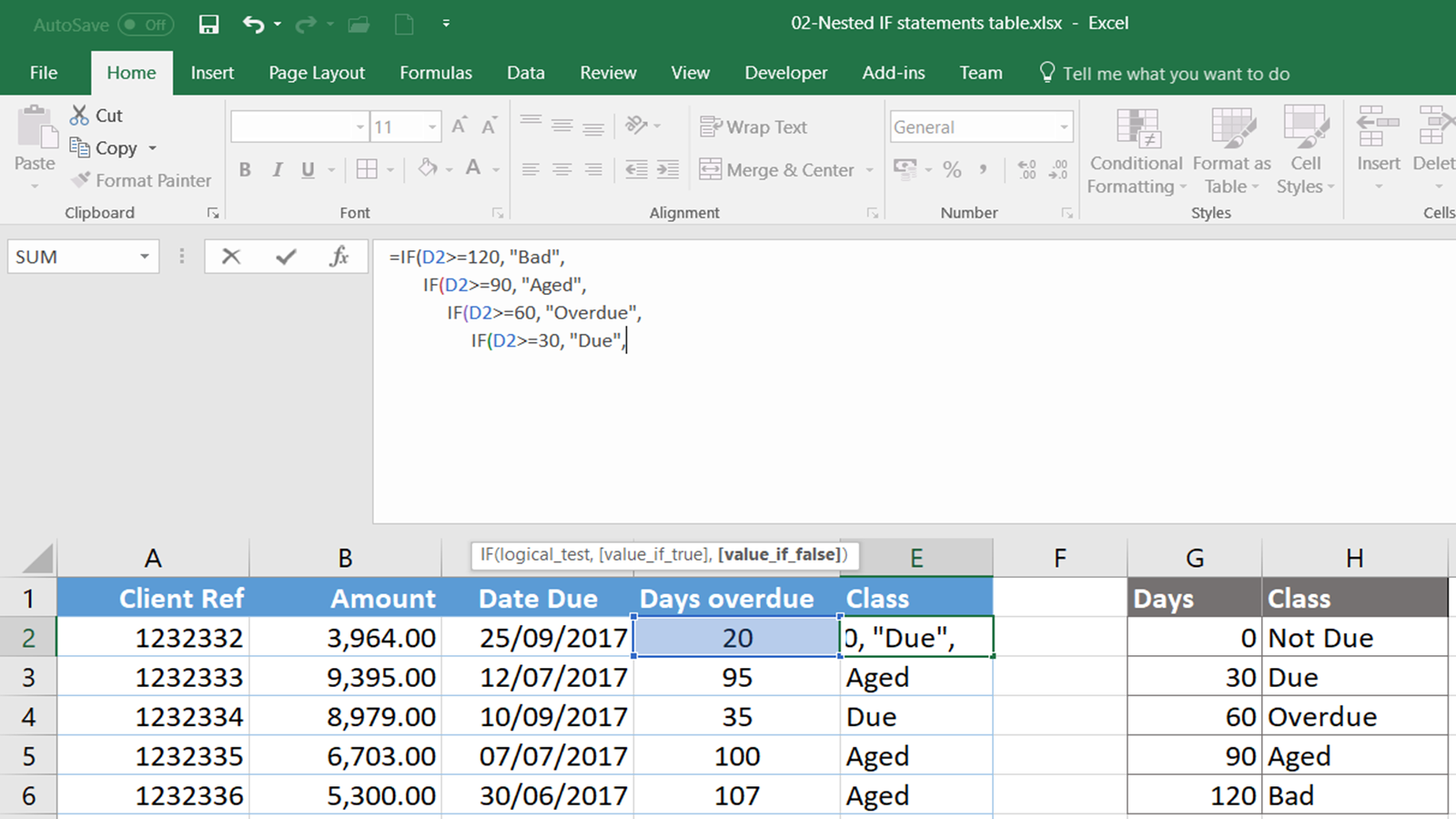 So, we end the formula by inserting “Not Due” as the catch-all, value-if-false argument and by inserting a closing parenthesis to match each of four opening parentheses which followed our four IF statements (as shown below). 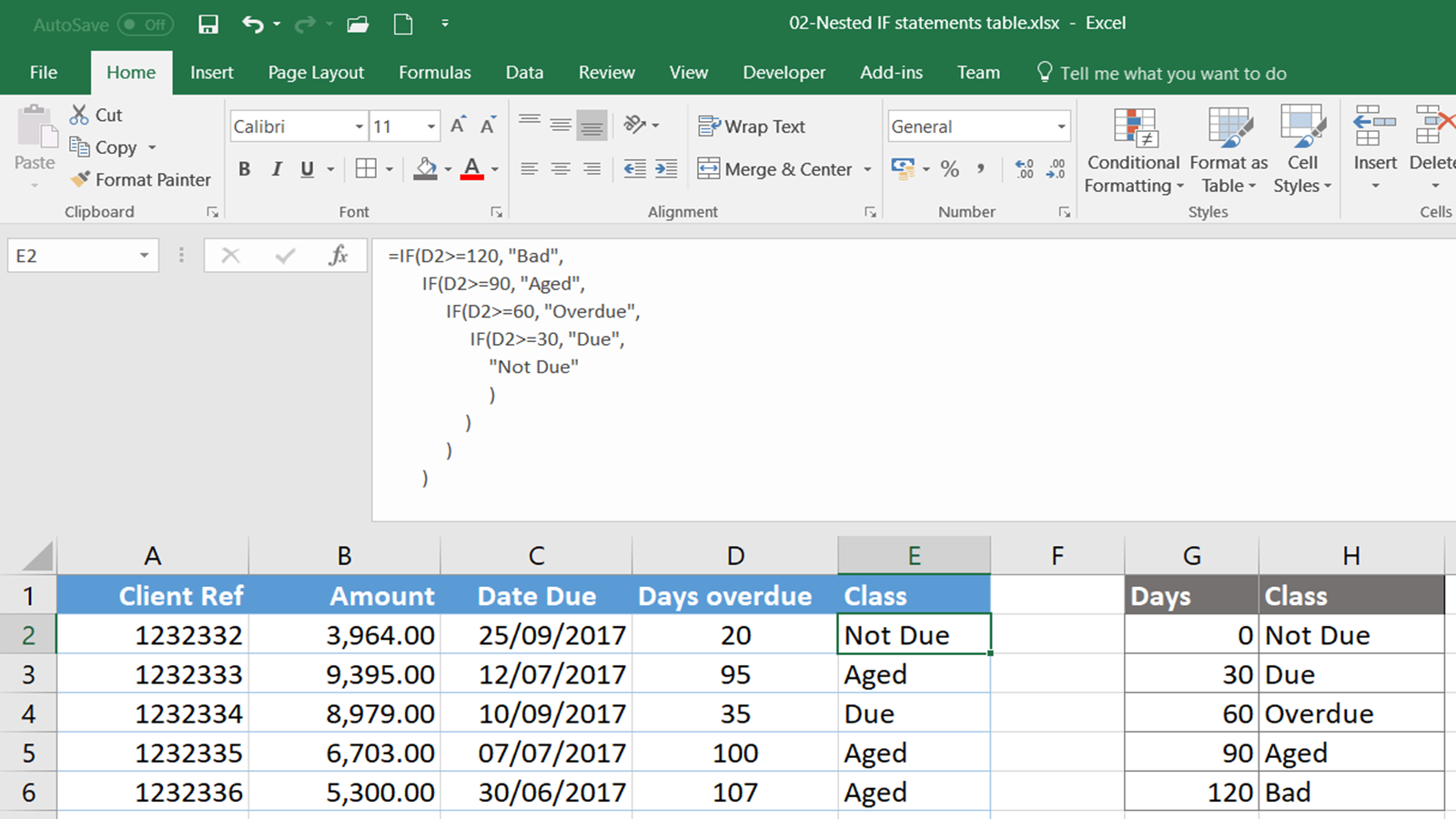 That completes our formula; so, we can restore the normal height of the Formula Bar and then copy the formula down.

That, then, is how nested IFs work; to understand them, just think of Russian dolls (unless you are one of those people who thinks that Russian dolls are much too full of themselves).

Nested IFs can become quite complex and convoluted; so, in the next two blog posts on logical functions, we will discuss two functions which provide an alternative to nested IF statements: IFS and VLOOKUP.