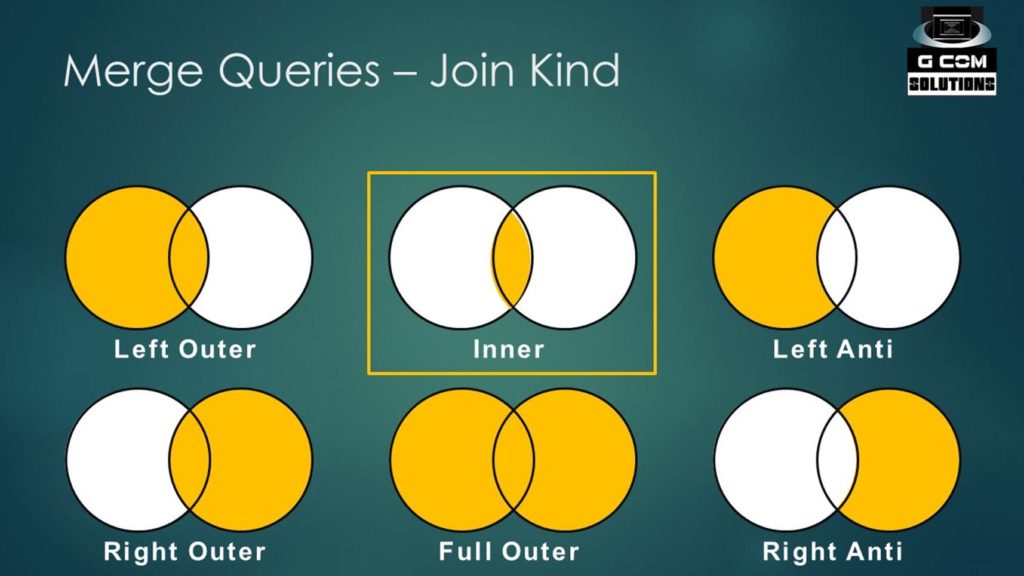 Merge Queries, is used to (horizontally) stitch together columns of data. This command is used where you have two data source which have rows in common; whereas Append Queries is used when you have two or more data sources which have columns in common. Naturally, having a common column in both queries is a requirement when using the Merge Queries command. The values in the common column are used to marry up the rows of data in the two input queries.

As with the Append Queries command, you have the choice of either merging into one of the original queries; or, creating a completely new query, which merges the two original queries together. You will usually find that the latter approach is more useful.

When the Merge dialog appears, specify which is the column you want to use for matching, in the selected table; and you do this simply by clicking on the column. (If two columns in each table are required for matching, hold down the control key and click on each column.)

Next, specify the name of the second Table the matching column as before.

You then have all the possible ways of joining the two input queries; and you will probably recognise these options as being identical to SQL joins. 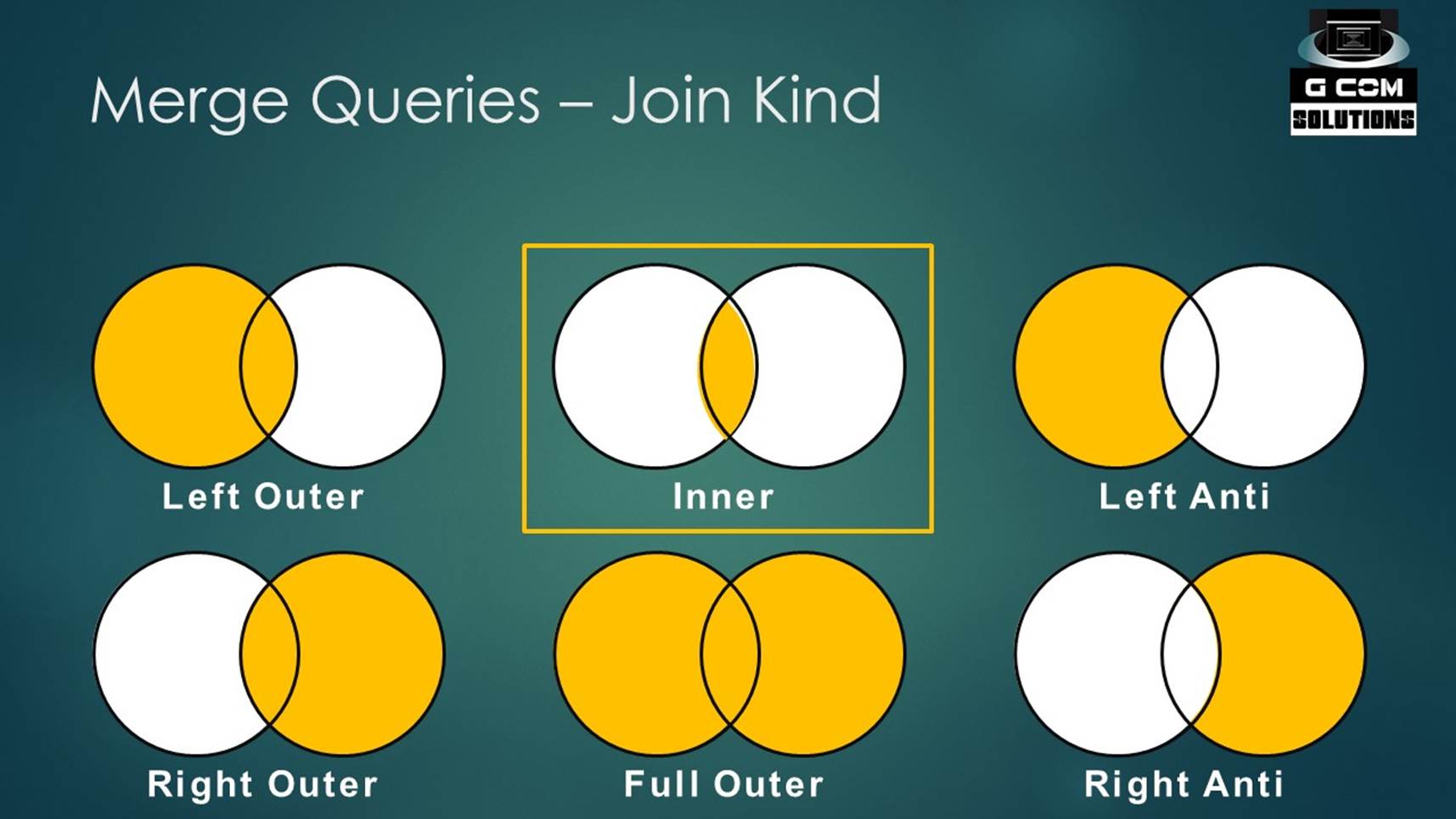 In the illustration shown below, we only want the matching columns from both datasets. Thus, we choose Inner (only matching rows).

When you click OK, the settings you have chosen will create a completely new query which will only contain rows of data where the same value is found in the matching column, in both input queries. However, unlike the Append Queries command, Match Queries places the merged table in a single column in the resulting query. This column then needs to be expanded to obtain the columns in the second table.

·       Table1
The first of the two tables whose columns you wish to combine in producing the resulting query.

·       Key1
The key column in table1 whose values will be tested for equality with those of the key2.

·       Table2
The second of the two tables whose columns you wish to combine in producing the resulting query.

·       Key2
The key column in table2 whose values will be tested for equality with those of the key1.

·       NewColumnName
The name of the new column generated by the Merge Queries command which will contain binary table data.

·       keyEqualityComparers
Optional specification of how the two key columns should be compared.

Having used the Merge Queries command, at first glance, it can appear as though the resulting query only contains the columns from the first table. However, if you scroll all the way to the right, you will find an additional, binary column, called by default “NewColumn”, and containing the data from the second table. To add the actual columns from the second table, we click the expand button which, behind the scenes, adds the Table.ExpandTableColumn function to our M code.

Click on the Expand button, on the right of the “NewColumn” column, to get access to all the other columns from the query produced by the Merge Queries command. In the dialog which appears, activate the columns which you want to add. Unless, there will be a clash of column names, you can also deactivate the option Use original column name as prefix. 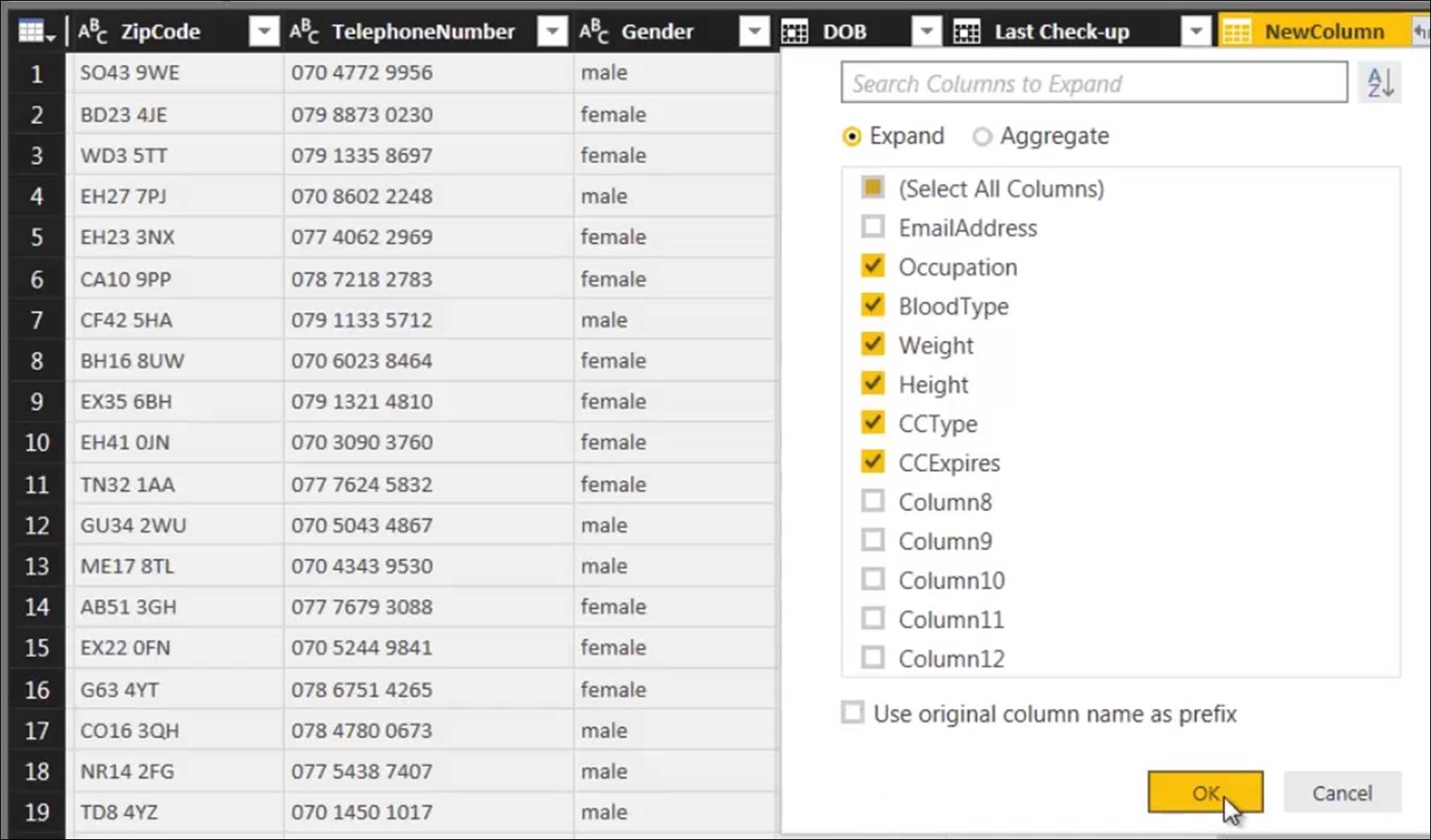 When you click OK, we have all the columns from the second table added to your query.

·       Table
The table which contains the column to be expanded.

·       ColumnNames
The columns from the expanded table which will be included in the resulting query.

·       NewColumnNames
The new names which will be given to the columns being selected. If this optional list parameter is omitted, the original column names will be preserved.