In this topic, which applies equally to both Power BI and Excel Power Query, we will compare the Table.SelectColumns and Table.RemoveColumns functions.

“If I add new columns to a data source will these new columns be loaded into Power BI on refresh?” Well, it depends on the syntax used in your query and, in particular, the choices you make when specifying the columns which you want to retain and those which you wish to remove.

The Table.SelectColumns function is used to determine which columns in a table are loaded into the data model. It corresponds to the interface command Home > Manage Columns > Choose Columns. 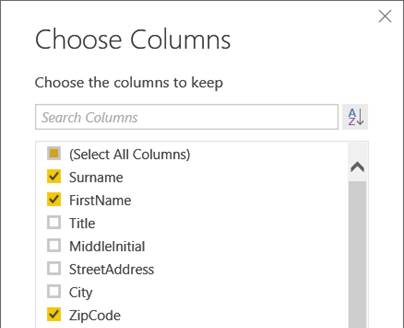 When you use the Table.SelectColumns command, you are asking Power Query to load specific columns with each refresh. This means that, if new columns are created within the data source, they will not be loaded.

The table whose columns you wish to select.

A list of columns which will be included in the resulting table.

The policy regarding any columns in the list which are not present in the data. Possible options are:

o   MissingField.Error
Return an error. This means that the query will be “broken” and will not produce a usable table.

o   MissingField.Ignore
This option is the complete opposite of MissingField.Error. It produces a table which simply ignores the non-existent column reference.

o   MissingField.UseNull
A useful alternative to producing an error, this option creates the named column but fills it with null values; thus, highlighting the error while still producing a usable table.